Posted on February 17, 2015 by Joan and Glen Inabinet — Leave a comment 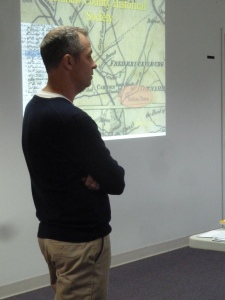 al Society program held at the Kershaw County School District Office Building. A professional archaeologist for the South Carolina Department of Transportation, Long and his family live in Camden.

Archaeology, Long said, can provide information not available by other means. He demonstrated, for example, how archaeology has lately revealed the influence of colonial potters in Camden on new design adaptations of traditional Catawba potters at Ayers Town. An active question-and-answer period followed the talk. Long also mentioned other local archaeological projects being planned as well. Conversation continued during refreshments and viewing of items from the sites.

Also of interest at the program was an exhibit case that Lon Outten brought from the Camden Archives with a display of even older Indian relics collected from plowed fields in upper Kershaw County, mostly in 1949. Centered in the case was a rare Deptford ax found in the 1920s in the vicinity of the Battle of Camden. 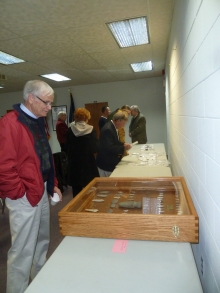 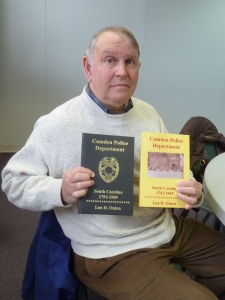 About Joan and Glen Inabinet

Joan A. Inabinet and L. Glen Inabinet are co-authors of A HISTORY OF KERSHAW COUNTY, SOUTH CAROLINA (2011, University of South Carolina Press) and active in the Kershaw County Historical Society in Camden, S.C.