le group of Society members, umbrellas in hand but unaffected by overhead clouds, enjoyed a delightful tour of one of Camden’s lovely historic estate homes, Holly Hedge, on March 24, 2013. The members-only tour followed a public program the Society held nearby at Our Lady of Perpetual Help Catholic Church on the “Immortal 600,” Civil War prisoners who were documented for history in a manuscript by a Confederate officer whose home is now known by the Holly Hedge name. Program speakers who have researched and written about the Immortal 600 were KCHS’s Harvey S. Teal, Karen Stokes, and Mauriel Phillips Joslyn. 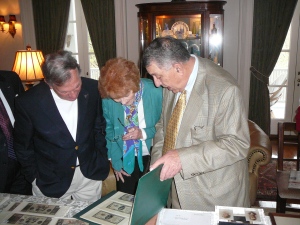 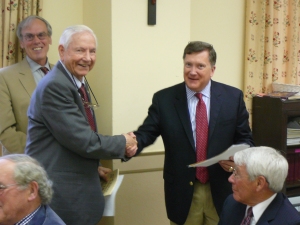 (Holly Hedge views—Top, postcard 1920s-30s. Black and white, Jack Boucher, 1960. Next three views inside during tour, including hosts greeting members to their home and Austin Sheheen displaying banknotes as part of historical displays. Last view, at program in Catholic Church, Harvey Teal makes a gift of an original manuscript list of Immortal 600 captives, made by CSA Lt. William A. Johnson, to Henry Fulmer of the University South Caroliniana Library.